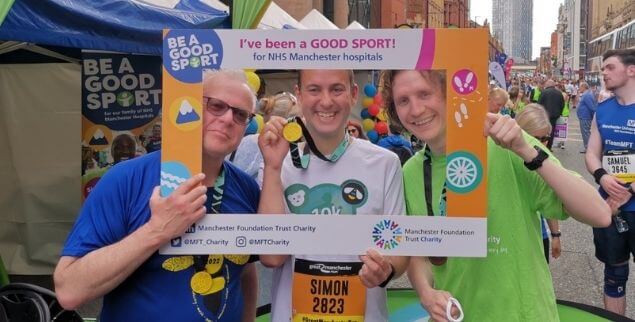 Simon Holman, Matt Ralph and I represented Castlefield at the Great Manchester Run last Sunday, all tackling the 10k distance, or just over six miles in old money. Castlefield has a good record in this event, and we have picked up a few team prizes in the past.

The Great Manchester Run is always a popular event, with up to 20,000 participants this year. I’ve done the race numerous times now and it just seems to get bigger and bigger every year and it’s always on TV. The elite men’s and women’s races were won respectively by Kiwi Jake Robertson (in a time of 28mins, 6secs) and Kenyan Hellen Obiri (30m 15s) – astonishing times. The date of this year’s race – May 22nd – was also a poignant one, as it was the fifth anniversary of the terrorist attack on the Manchester Arena and the runners held a minute’s silence before the start to remember those we lost.

The race started on Portland Street as usual and in order to manage the crowds, the runners set off in waves. Even so, it took me (White Wave) nearly ten minutes even to cross the start line. The pleasant weather brought out the crowds, whose energy helps to carry you along to the finish. Our finishing times were:

By completing the run, we helped to raise £683 (so far) for La Renaissance and for the Royal Manchester Children’s Hospital.

Thank you to everyone who has sponsored us so far and we look forward to more co-owners taking part next year in what is a fantastic event.

There's still time to show your support too! If you’d like to donate to our pot please visit: https://www.collectionpot.com/pot/1717925/

Castlefield, along with an international group of investors, has co-filed a health-related shareholder resolution to be voted on at Unilever’s AGM. The resolution, organised by ShareAction and the Healthy Markets Initiative aims to encourage the company to adopt ambitious targets to increase the share of healthy foods in its sales and asks Unilever to consider a number of specific actions.