The future and the environmental: sometimes it helps to be reminded of the good things

At the start of the summer holidays I took a few days off with my wife and 2 daughters, age 6 and 9, to visit my parents in Wiltshire.  One morning we took a trip to visit the Uffington White Horse, which is probably about 15 miles from my parents’ house over the Oxfordshire border.  The last time I visited that spot was just over 11 years ago, when I got down on one knee and proposed to my wife while standing on the eye of the most majestic of the Shire’s 7 white horses.  Luckily she said ‘yes’, but for a moment she thought I was simply tying my shoe lace.  Eleven years on, with two sprightly, energy-filled children in tow, it seemed the right time to introduce them to a little of their heritage.  They were fascinated by our tale, eager to recreate it and announce their undying love, in between moments of chasing the mildly petrified sheep, sliding down the banks to create grass steaks on their leggings, and leaning into the swirling, warm winds to feel the strands of their long, blonde hair bobbing about their faces.  To get to the horse there is a National Trust car park to the West of the hill, and from there it is a gentle traipse travelling up the hillside until the chalk markings of the Horse become visible, and the hillside in front of it drops dramatically away.  To the South the hill climbs above you, to the North it falls away with a wide and deep, quintessentially English, vista in front of you.  July is a particularly good month to visit as the forested parts of the view are deep, lush green in deciduous foliage, interspersed with a patchwork of gold and green fields.  Pockets of life are evident as thatch-laden villages and the occasional market town lying low within the 30 mile deep arena ahead, the odd tractor gently traversing distant farms, and flocks of black birds swooping to and fro in swirly displays from tree to land and back again.  The depth, breath and pure magnificence of what is in front of you makes for one of those places in the world that you can do nothing but enjoy.    And on this particular day there was a skylark hidden in the skies above us, intensely chirping out its erratic but beautifully sonorous tune, which in these days of specie decline and environmental collapse makes for a refreshing symbol of hope.  Other than listening to the skylark, in front of me were two more (juxtaposed) symbols of environmental hope.  In this distance towards the far Eastern corner of the view is Didcot Power Station.  The most noticeable part of the power station is the giant, over-bearing cooling towers.  You will be familiar with their fat-bottomed cylindrical shape, and ugly bellow of fumes that are often pouring from the top.  Sat within their surroundings they really are the most inappropriate of eye sores.  So how can these towers represent environmental hope?  Quite simply, the last time I spotted them from the hill all those years ago there were six of them.  But in 2014 three of them were demolished.  In 2015 the blot on the landscape is still there, but thankfully there is less of it.  Our reliance of coal fired energy is slowly starting to wane.  Almost diametrically opposite the towers, towards the far, Western reach of the plain, is a string of 5 white wind turbines, nose to tail in a line through the centre a giant corn field.  Eleven years ago there were far fewer such turbines in existence, and certainly none at the feet of Uffington White Horse Hill.  Gently spinning away, feeding our energy needs via the most natural of sources.   Hopefully one day, as the wind continues to blow and their considered popularity continues to flourish, they will help lead to the complete demise of Didcot Power Station, and to similar plants throughout the land.  Let’s hope.  We left the hill to carry on our journey.  Happy memories had been created, the fresh air and natural toys in front of them had worn out the children, and thoughts of their future had turned a little more positive having witnessed such symbols of endurance and change. 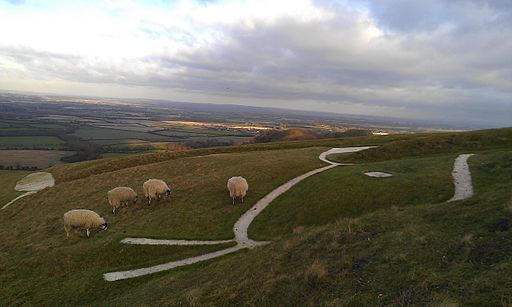 Image by Ethan Doyle White. License can be found here.