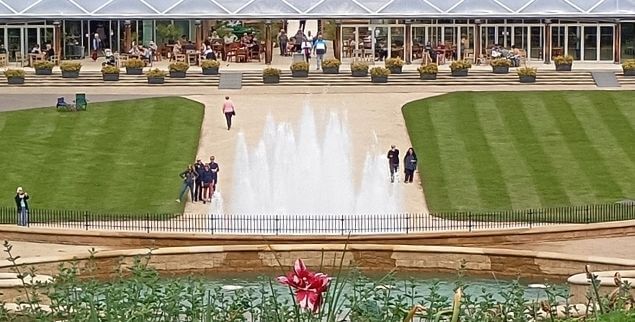 At Castlefield, we’re not just equity investors. Amongst other things, we also support the charity sector by investing in Retail Charity Bonds. In this article, our Head of Research David Gorman discusses his visit to the North East to see the great work of one of our investees, the Alnwick Garden Trust and check on its latest project, Lilidorei.

On May 19th, I travelled up to the North East to join a small group of investors visiting the Alnwick Garden in Northumberland (www.alnwickgarden.com). Castlefield invested in the Alnwick Garden Trust Retail Charity Bond back in early 2020, just before the pandemic hit.

Retail Charity Bonds are issued by RCB Bonds PLC, a bond-issuing platform created to raise debt finance for charities and ethical companies through bonds listed on the Order book for Retail Bonds (ORB) of London Stock Exchange[1]. By issuing the bonds through a special purpose vehicle and lending on the proceeds, RCB allows charity borrowers to tap their supporters for amounts of £10 million or more, while enabling the investors to trade the bonds in the secondary market. Since we invested, we did not have the chance to visit the site until last week, more than two years later than expected.

The main purpose of this trip was to gain a feel for the scope and scale of the Garden and, specifically, to have a progress report on the newest project on the site, the Lilidorei Play Village, which the bond funding is intended to finance.

The driving force behind the Alnwick Garden Trust is Jane Percy, the Duchess of Northumberland, who has led the development of the Garden for more than two decades. The Trust uses the proceeds from paid-for visits to The Garden to maintain the site, while delivering on its charitable objectives and programme of events intended to help reduce social isolation, improve well-being and support the community in Northumberland. The county is coastal and rural in nature and, like some other “touristy” places in the UK, has more than its share of social problems, such as drug addiction, crime, few job opportunities as well as loneliness and other issues associated with poor public transport and lack of housing.

On arrival, the visitor enters the Garden through the very impressive Pavilion, which houses the café, ticket office and other buildings, to be greeted by a view of the Grand Cascade, opened in 2001. 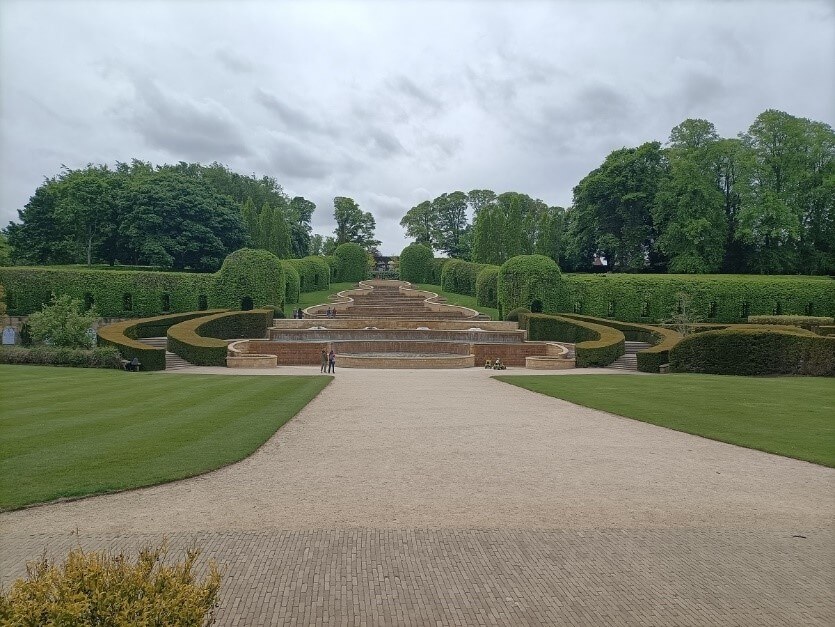 The Serpent Garden is serpentine in shape, not full of snakes! It contains several striking water features, designed by William Pye, which are fed from underground, using the same source as the Cascade. The water features are intended for children to explore and play in them.

After the Bamboo Labyrinth, we visited the Rose Garden and the Ornamental Garden, with its 16th Century gates, which was the original walled kitchen garden of the Castle. 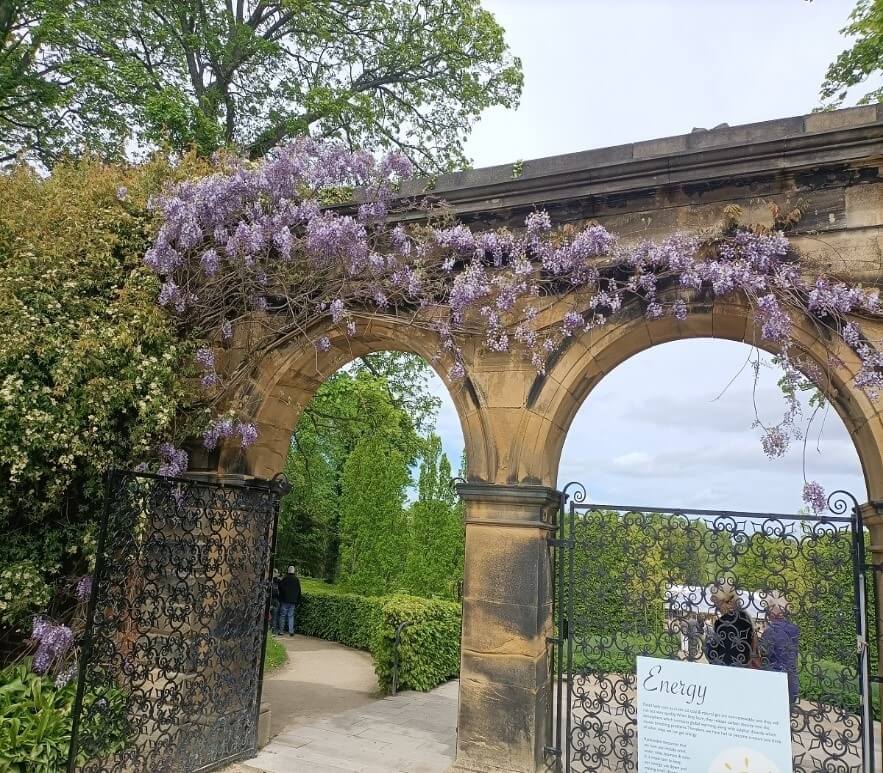 Other areas we explored were the Cherry Orchard, the huge Treehouse, where we had lunch and the Poison Garden, where we definitely did not sample anything! The Poison Garden is a nod to the use of the adjacent Alnwick Castle as a filming location for the Harry Potter series of films, which draws a substantial number of visitors in its own right.

We saw the Trust’s charitable efforts in action when we met up with a group of Elder Berries, senior citizens who meet at the Pavilion up to three times a week to chat, bake and play games, thereby helping to stave off loneliness and isolation.

The Roots & Shoots Garden offers local school children and elderly people the chance to tend their own small plot. This enables the children, often from deprived areas, to learn about nature and growing food and allows the adults to re-connect with nature and meet other, like-minded locals. This can sometimes be the only regular social interaction some attendees have. 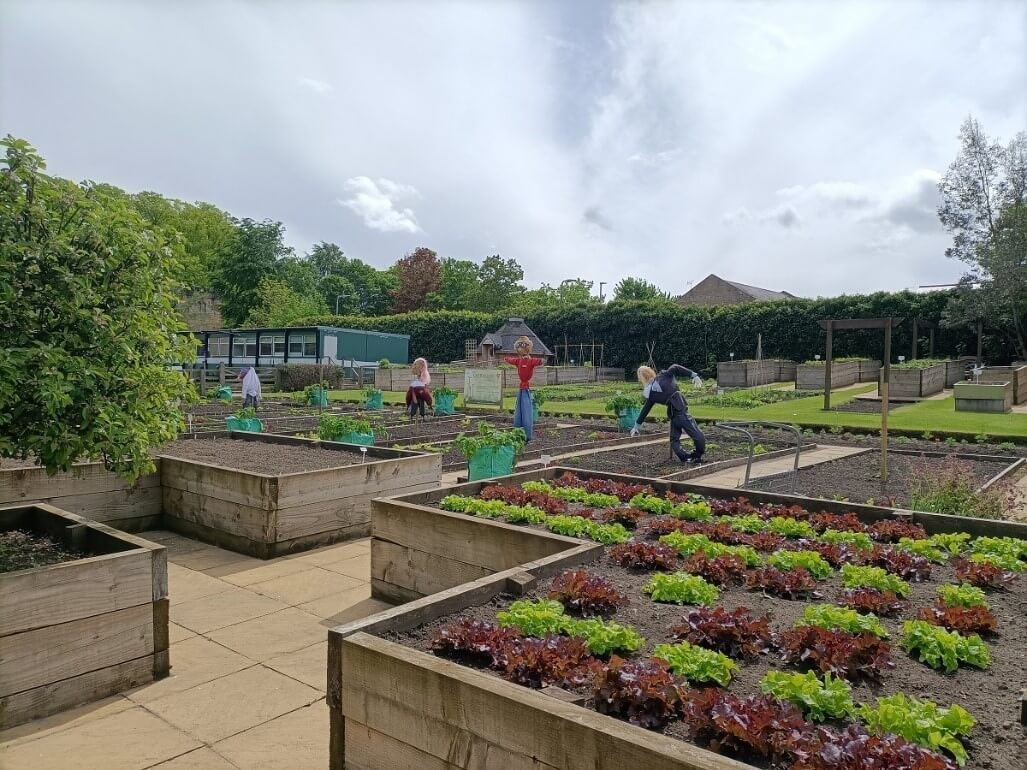 The £10m Retail Charity Bond issue is providing  two thirds of the estimated £15m cost for the construction of the Lilidorei play village, a themed all-weather attraction described as a whimsical wonderland. The approved plans consist of:

The village will be a separately ticketed attraction and will be targeted at families with school age children. On completion, it is expected to be the world’s largest play structure. An important objective of the project is the conversion of casual day-trippers into longer stay visitors to the area. The plan is for Lilidorei to open at Easter 2023. Despite pandemic disruptions, management are still on course to deliver this ambitious project on time. Rising input costs have been a slight concern, as has the availability of some materials, but the on-site team feel that these problems are still manageable. An interesting development is that the Lilidorei construction project is being filmed and expected to be broadcast on Channel 4 in 2023[2]. This coverage will help to improve the profile of this project, and the Garden as a whole. Work has commenced on the project, see image below. 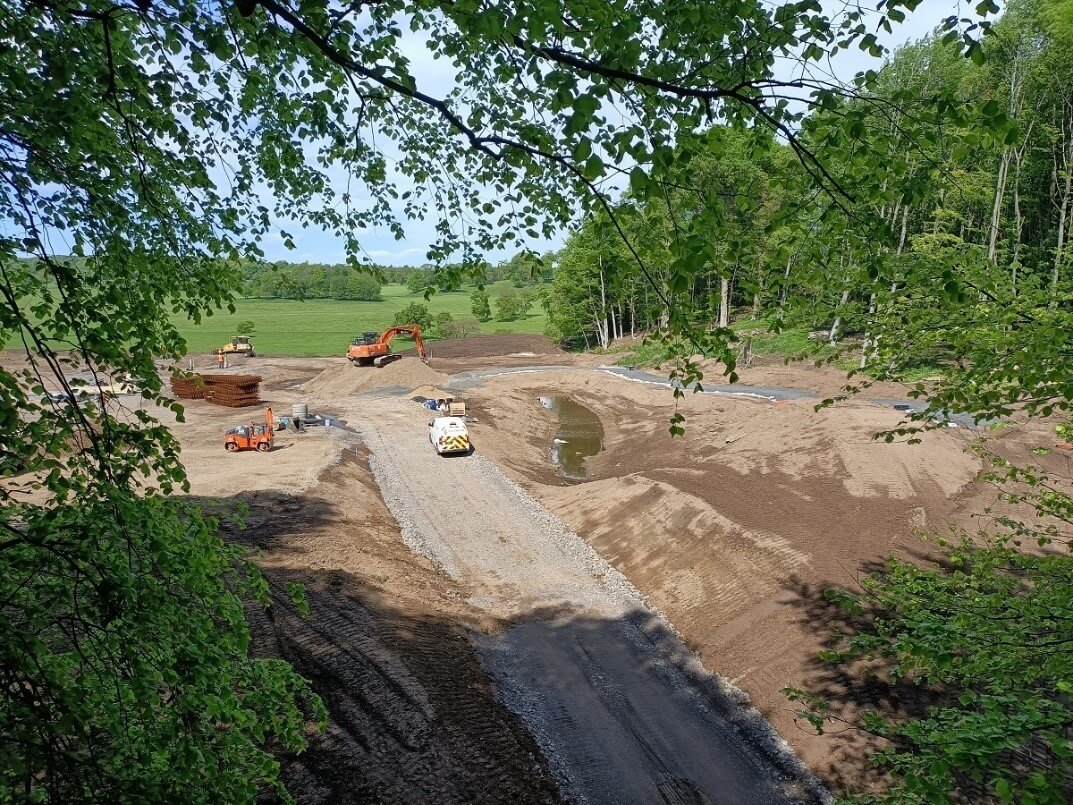 Information is accurate as at 23.05.2022. All photographs taken by the author with permission. Opinions constitute the fund manager’s judgement as of this date and are subject to change without warning. The officers, employees and agents of CIP may have positions in any securities mentioned herein. This material may not be distributed, published or reproduced in whole or in part. With investment, capital is at risk.