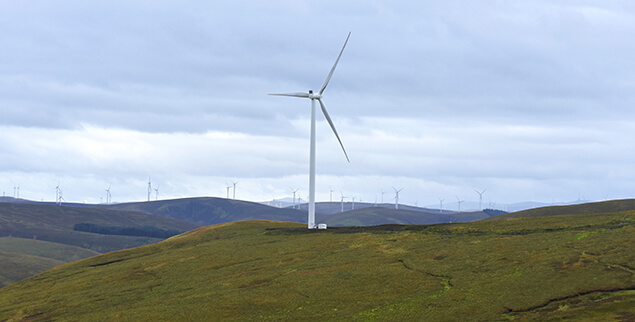 Always keen to don the hard hat and Hi-Viz, I joined a group of about a dozen visiting the Clyde wind farm between Biggar, Abington and Moffatt in the blustery hills of South Lanarkshire. The farm started exporting electricity to the national grid, via a local sub-station, in June 2011 so is now well-established. The original site was extended with a further land purchase and, according to the operators SSE, the acreage now occupied by the farm is larger than the City of Edinburgh. There are now 206 turbines on the Clyde site, the majority of which have a maximum output of 3.2 Megawatts. 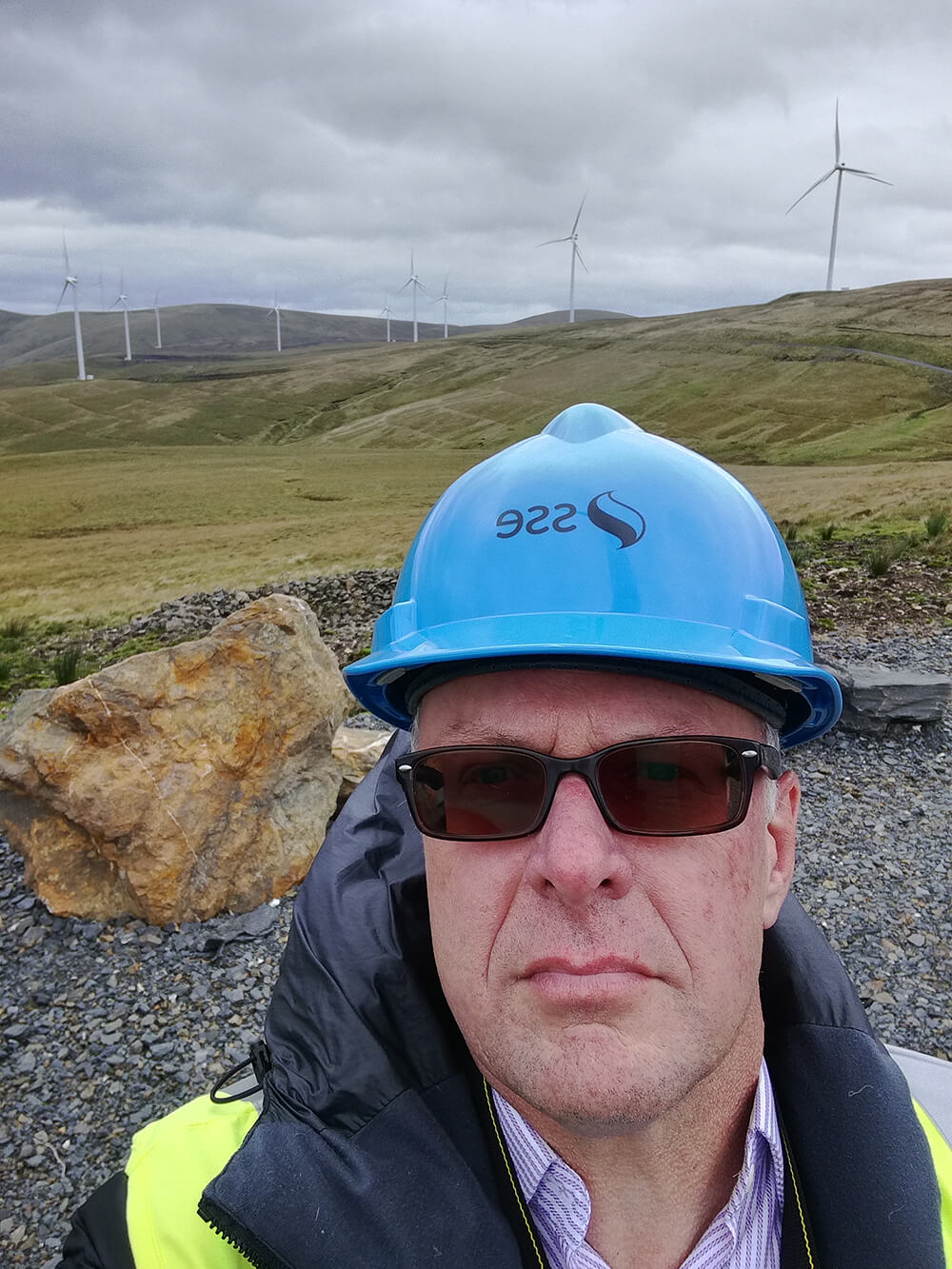 David and just some of the 206 turbines on site.

The industry body Wind Europe (windeurope.org) reports that Britain is Europe’s third largest producer of wind energy and most UK turbines are sited in Scotland on land which is boggy, high up and not much use for anything else – even sheep farming!

In March 2016, SSE signed agreements for the sale of 49.9% of Clyde Wind Farm to Greencoat UK Wind PLC and another party, GMPF & LPFA Infrastructure LLP. Greencoat UK Wind PLC (our host for the day) is a large renewable infrastructure fund which is currently invested in 30 wind farms, both onshore and offshore, with net generating capacity of 785 Megawatts. These assets provide sufficient electricity to power 550,000 homes. (Source: Greencoat.)

We invested in Greencoat UK Wind when the company floated in 2013 and we have been keen supporters ever since. On top of the obvious benefits of investing our clients’ money in clean energy, we have enjoyed good financial returns from dividends and capital growth over the past five years.

When we arrived on-site, we were given an introduction and the all-important safety briefing. An interesting health and safety pointer is that everyone using the car park must “reverse park”, so that they can drive forward out of their parking space, thereby reducing accidents – worth remembering on your next trip to the supermarket! 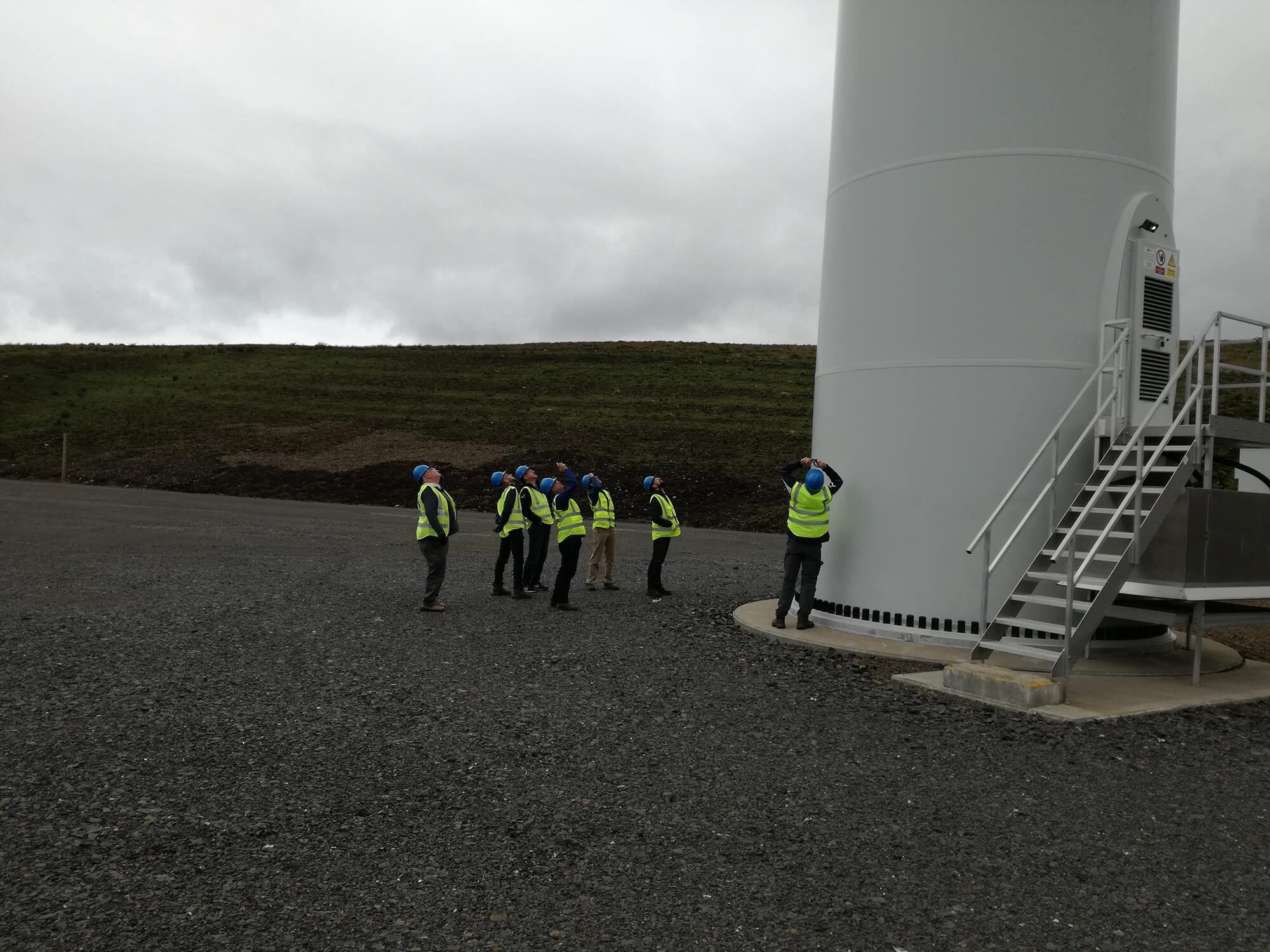 David and the group are 'blown away' by the immense size of the turbines.

It is only when you stand underneath a working turbine that you comprehend the sheer size of them. Each blade, which looks like an aircraft wing, is 50m long and weighs nine tonnes and the gearbox inside a turbine is the size of a small car. The noise the blades make as they rotate is incredible. Each turbine has a mini weather station on the top and can shut itself down when the wind speed is too great. It does this by rotating itself away from the wind so that the blades stop turning. The level of technology these days is such that the whole farm can be controlled via a mobile phone app. Amazing!