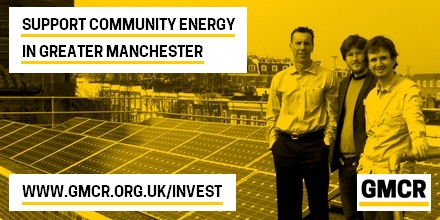 Would you like to help support community energy in Greater Manchester?

I know Ali Abbas and Kate Eldridge, as friends and through the work we all do campaigning for Friends of the Earth (FoE) in the North West. They came up with the idea of setting up a community energy project at the FoE Basecamp 2 years ago. Basecamp is an annual event where FoE brings together campaigners from FoE and other similar campaigning organisations. Recently the event has been in Castleton, Derbyshire and it is a fantastic weekend of seminars and creativity. We have just come back from this year’s event and I wanted to pass on how these events encourage positive change.

Ali and Kate were inspired by the FoE Run on Sun campaign at the time, this campaign was supporting solar energy on schools. When they returned, they spoke to lots of people and schools who all thought the idea of schools having solar panels was brilliant, the main barrier being funding.

They looked at examples of successful community energy projects in other parts of the country and wanted to bring the community energy revolution to Greater Manchester. These schemes raised money from the community to invest in solar panels. People who invested got interest on their shares, the buildings who made their roofs available got a discount on the cost of the electricity from the panels, and the profits were paid into a community fund.

They decided to form a community energy group, which they called Greater Manchester Community Renewables (GMCR), so they could take up opportunities wherever they were found in the region. They also joined the Energy Mentoring Programme and got free mentoring from community energy gurus.

Salford City Council saw the benefits of the local people owning and benefitting from the panels, and agreed to sign a co-operation agreement. At this point, the Government issued a consultation to say they were going to take away a key support mechanism for community schemes which is called pre-registration.  Because the Feed-in Tariff is gradually reducing, pre-registration meant that you could lock in a specific rate for 12 months, so when you go out to the community to ask for their investment, you can tell them how much Feed-in Tariff the panels will be able to earn.

It then became a rush to look for sites within two weeks so they were able to pre-register these before the Government removes the facility. They were pleased that the Council took up the challenge. However, with one deadline gone, the clock started ticking on another as the installations need to be completed by the 29th September 2016, so they can fully register for that September 2015 Feed-in Tariff.

In the meantime, the Government launched another consultation and the Feed-in Tariff was cut. So it became even more important to complete the installations we had pre-registered to last year's Feed-in Tariff.

They are now at a critical stage as they have until the end of June to raise £186,000 to fund the installation of the panels on the four sites.  In July, they will pay the installer to order the panels and install these over the summer holidays.

The installation will provide the schools with a display to show the children what the panels are generating in real time, and also support for the school to use the panels as an educational resource.

GMCR is a social investment where your money will be working hard to do some good for the school, the environment and the community.

GMCR has launched a community share offer to fund the project, with a target of raising £186,000 by the end of June.

To find out how you can help GMCR raise enough to ensure all four sites get their solar panels, please visit www.gmcr.org.uk or search for @WeAreGMCR on Facebook or Twitter.